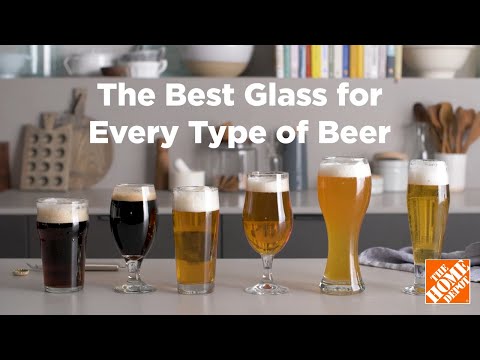 A cold bottle of beer is welcome after a long day, but you’ll need drinkware for the beer if guests show up. Beer is commonly served in pint glasses, but there are beer glasses designed to complement the brews poured into them. Consider the many choices of beer glasses when adding to your tableware decor. Read this guide to learn about the types of beer glasses to serve the best brews in. 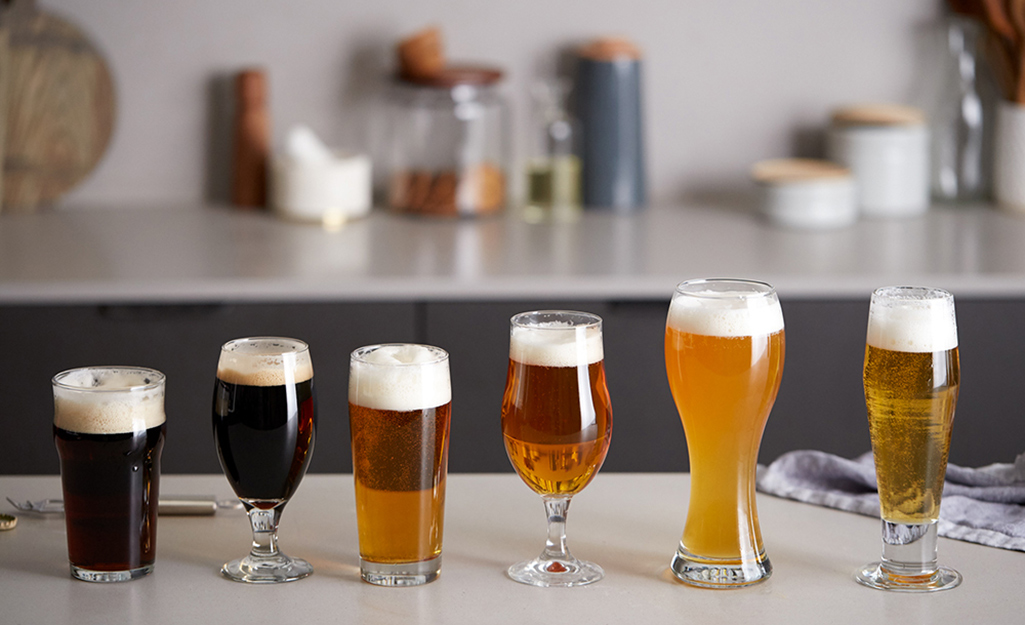 Tailoring beer glasses to a specific brew is not simply a trend following the rise of the American craft beer scene. Brew masters have long understood that the size and shape of a glass impact flavor in a big way.

Types of beer present incredibly diverse characteristics — different heads (or the froth that accumulates at the top of the glass), density of bubbles, colors, mouthfeel, intensity and profile of aroma. The proper beer tasting glass will enhance all of these elements, uniquely handling scents, tastes and visuals through interplay with air exposure, temperature control and light technique. In short, different beer glasses give us different drinking experiences.

While beer geeks are known for reveling in these endless glass options, understanding the different types of beer glasses and keeping the right set on hand is not exclusively in the domain of beer connoisseurs. Skeptical? Here’s the glass-by-glass rundown.

Probably the most ubiquitous shape, this style — tall and slender with a slight curve toward the top — is your go-to for light beers. When thinking about how best to enjoy your beer, two things should come to mind: air exposure and temperature control. Most types of beer tasting glasses are designed to facilitate optimum results for these two factors.

The pilsner glass can come in a variety of sizes but most often they hold slightly less beer than a pint glass, generally 12 to 14 ounces. This means that the only real downside to this stylish and useful glass is that it may not hold quite as much as some other glasses. 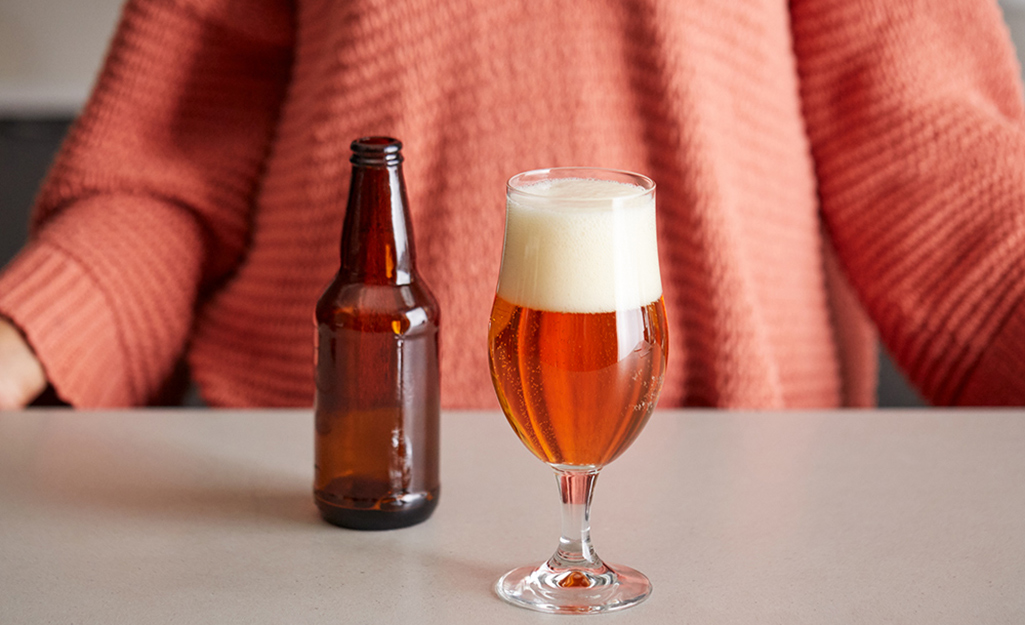 There’s a reason this glass should be in your lineup beyond its aesthetics. Sometimes known as a Belgian glass, this tulip-shaped beer tasting glass does wonders for flavor-enhancement and is specifically meant to serve hoppy and malty beers.

Its bulbous bowl traps flavors in while the wide, open rim supports a generous head. Added to that, the glass has a stem and foot that allow you to swirl to your heart’s content and enjoy a masterfully flavorful drink.

A close relation to the tulip is the thistle glass. This shape has the same curvy qualities and is also set upon a stem but is slightly less squat than the tulip glass and features a more pronounced bulge at the bottom. Its name is inspired by the Scots. “Thistle” is actually the official flower of Scotland, and as the name would suggest, the glass was developed with Scottish ales in mind. 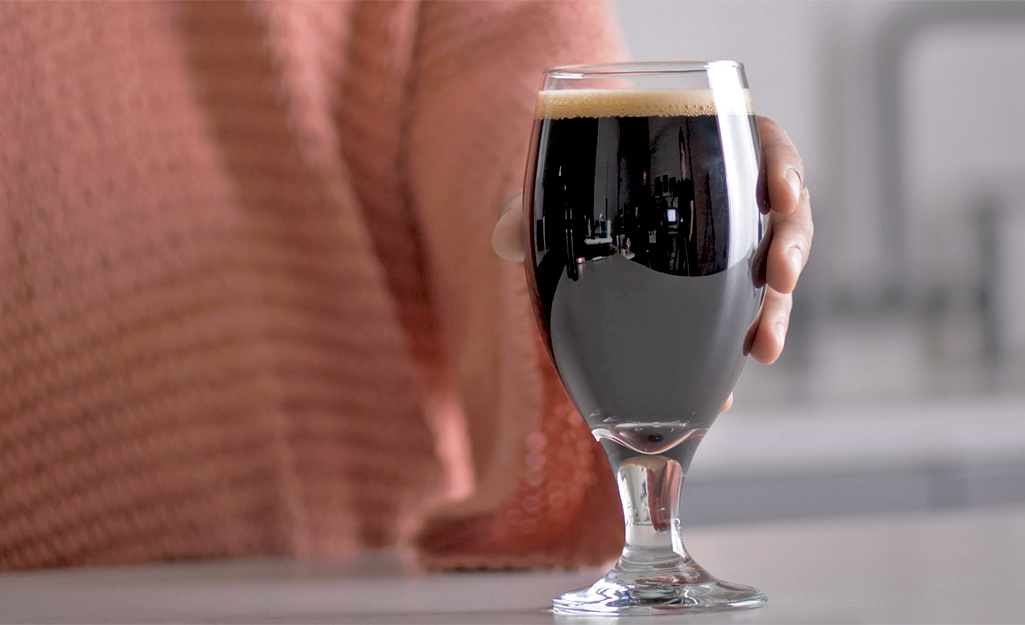 Not to be confused with a tulip glass, this squat glass is perfect for bringing out darker beers. Think of those with warm flavor notes like coffee, chocolate and roasted malts. The stout glass bowl is shaped similarly to a taller pint glass, only taken to an extreme — the upper curvature is maximized, creating the perfect environment for building a massive head (one of the defining features of your heavy beers).

This less curvy shape actually promotes divisions within the basin and creates a hearty “shelf” — a term referring to the beer sitting just below the head. This helps promote head retention. Below the aerated top, the glass’s super-wide middle section concentrates and feeds upward to help you experience all those complex flavors. This glass is also defined by the material used: a thick, glossy glass that enhances the beer’s deep sheen. 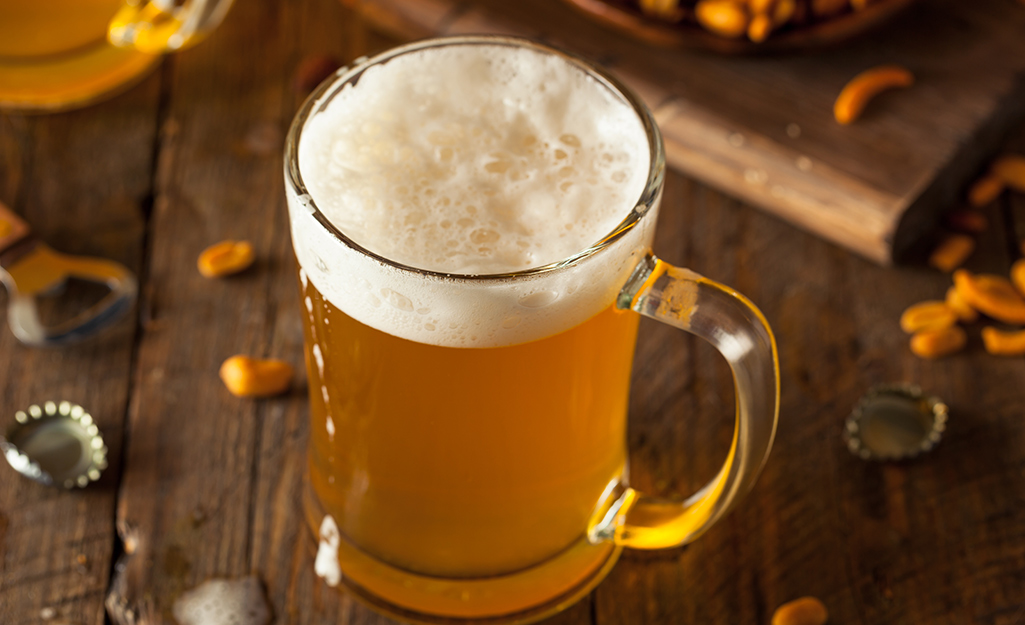 Looking for a glass that’s extra fun and ideal for toasting? Beer steins and mugs are for you. It is also your best bet when you’re aiming to keep your beer’s temperature icy. The handle, a defining feature of these glasses, enables a good grip that avoids skin-to-bowl contact, keeping your hand from raising the content’s temp. The thick, insulated glass, which is sometimes even dimpled, is also great for this, making it a classic at the pub.

Many traditional steins are distinguished by a thumb-operated lid, which helps protect your beer — from outside intruders and sloshing that could be of your making. Perfect for the next Oktoberfest event you attend. 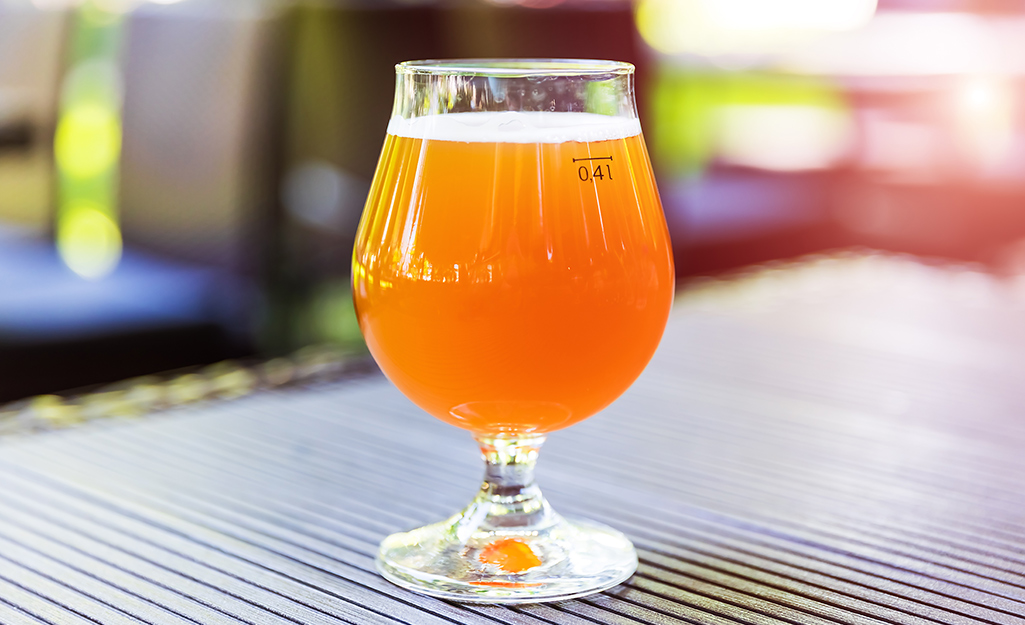 Maybe not the most essential of the beer glass options, a goblet is fun when volume is one of your main concerns (add to that list a beer growler, too, though they’re meant more for transporting beer rather than drinking directly from them). With a large bowl and wide mouth, this maximalist glass is shaped to keep the beverage within the glass lively — because in theory it’s going to take you a minute to finish.

A close relation to a goblet is a chalice. The only remarkable difference between the two being that a chalice is generally made of thinner glass.

It's great to keep goblets on hand to use for drinking beverages other than beer, as well. You’ll find them all over the Iberian Peninsula holding impressive, juniper berry-spiked gin and tonics. 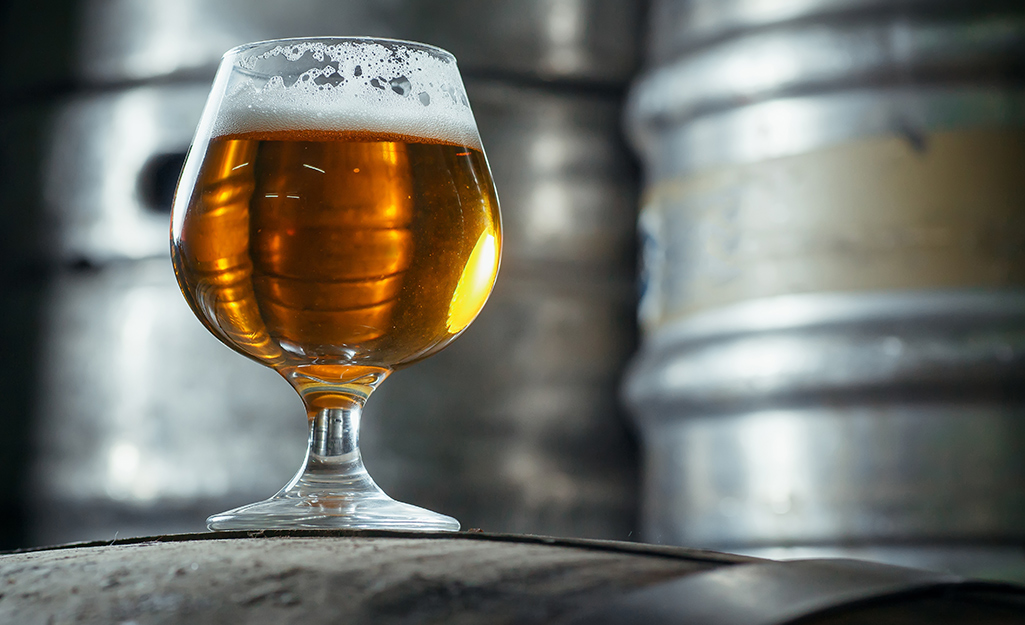 Traditionally used for cognac or brandy, this is a vessel ideal for supporting a cordial’s layered aromas. Beer drinkers, too, have long enjoyed these glasses. The snifter glass looks very similar to a wine glass, with a wide belly and short stem that invites endless and fruitful swirling. Because of this very fun and quite purposeful feature, we recommend leaving a bit of space at the top of this glass when filling to avoid spills onset by generous swirling. Also, the snifter beer glass’s tapered lip is hard to beat when looking for a rim that draws even more depth onto your palette. 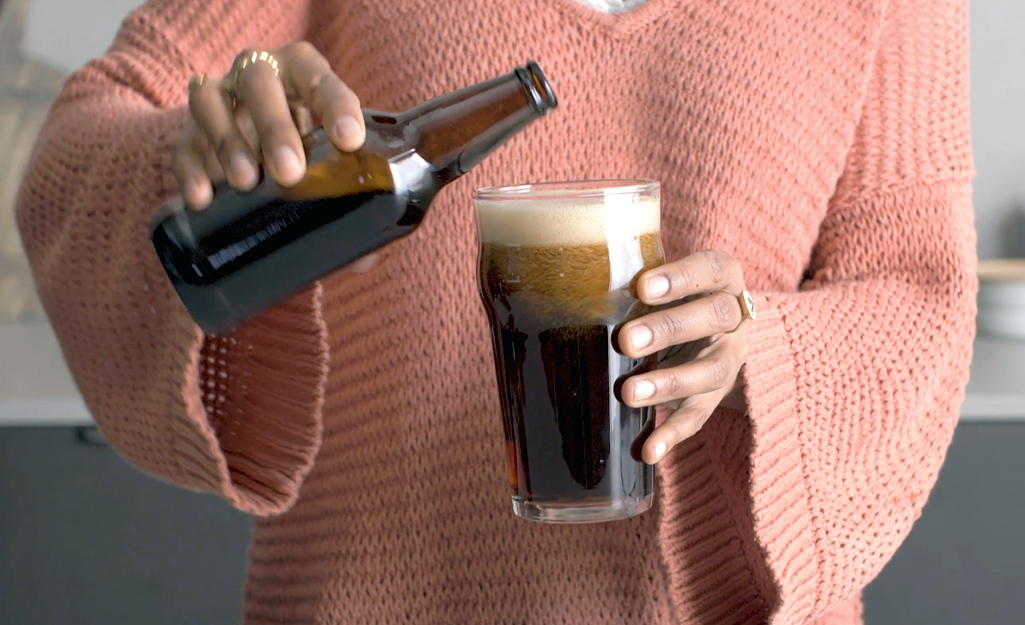 Different beer glasses serve different purposes. The 16-ounce American pint glass, sometimes called a shaker glass, is your utilitarian choice. It is the glass you should opt for if lack of storage is your biggest concern. A wide top allows for solid aeration, but in our estimation, the glasses’ greatest draw is that their cylindrical bodies are stackable.

Other selling points: A pint glass is relatively cheap, accessible and easy to clean. If you’re trying to coax out more flavor, a curvier type of beer glass is a better bet, but this workhorse is ideal for someone feeling overwhelmed by all the options.

Cousin to the American pint is the Imperial pint, also known as the English pint or Nonic glass, which ups the ante from 16 to 20 ounces. It also features a slight lip at the mouth and subtle curvature at the top section of the bowl. These are easier to grip than the straight up and down American pint glass and the curve will likely stave off glass chipping for a slightly longer time period. 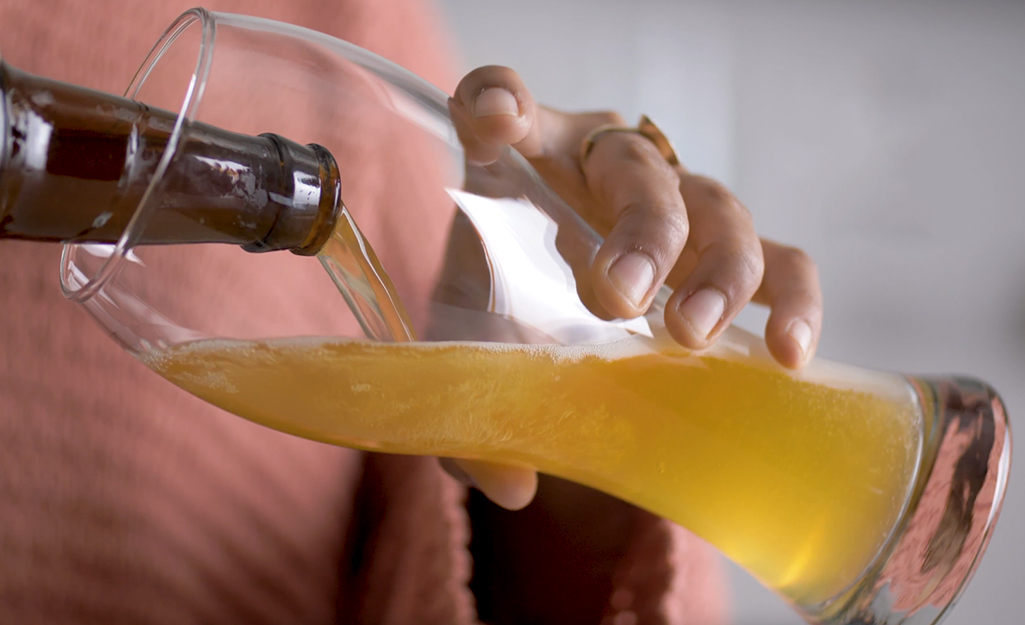 This glass is also known as a “vase” thanks to its elongated, sensuous shape. Similar to many of your other glass options, it has a bulbous top section, but the weizen glass is set apart by its strong base, remarkable height and volume; the glass typically holds around a fifth of a liter of beer.

Rather than opening up with an inviting mouth, it has a bowed rim, keeping aromas within the glass, which you’re meant to stick your nose into to have a sip. Upon doing so, you’ll take in the weiss’s signature aromas of clove and banana and encounter a divinely fluffy head.

A note on garnishing: While many bars will serve a weiss beer with a citrus slice on the rim, something that is meant to complement the beer’s flavor while serving as an eye-catching flair, this additive will diminish that head, so remove it right away. 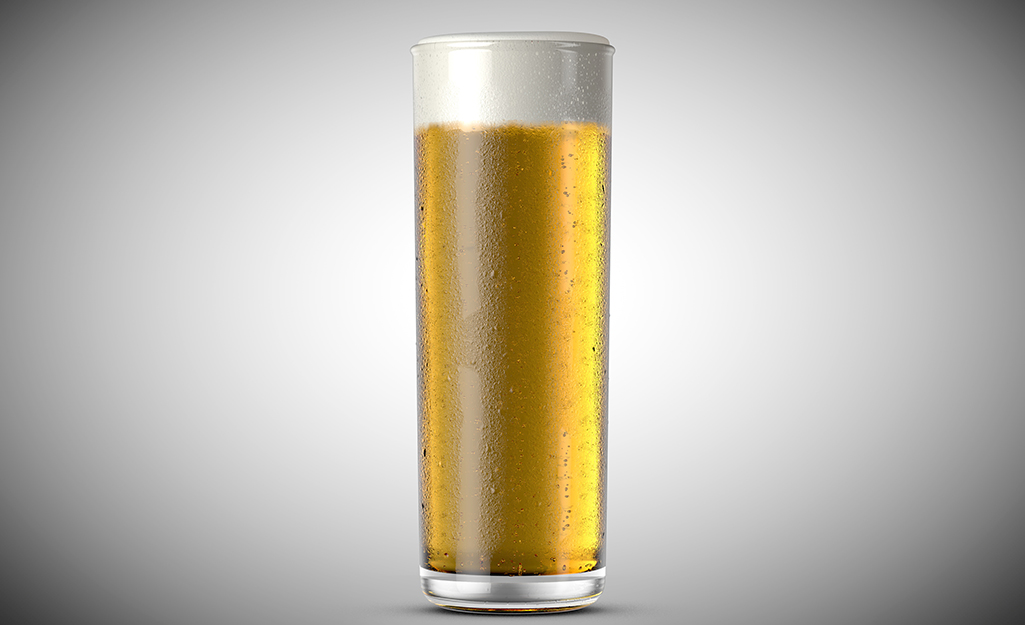 Getting its name from the German word for pole, the stange glass is narrow, straight and cylindrical, and typically holds 6.5 ounces. Drinking from a stange glass can feel as if you’re drinking from a champagne flute thanks to its delicacy.

The uninterrupted shape concentrates soft hops and preserves carbonation just as a champagne flute does for its intended contents. As the aesthetic and fragility of glass would suggest, these are meant for more subdued beers. To offset the fragility of the glass’s body, stanges typically have a thick, reliable base.

The types of beer glasses you collect should allow you and your guests to enjoy a unique tasting experience together. Sets of four types of beer glasses to suit every sip are generally a safe bet for your glassware collection. When you’re ready to select your choice of beer tasting glasses to add to your collection, download The Home Depot Mobile App, search images and buy the glassware you want.

Types of Cocktail Glasses for Your Home Bar

The Best Wine Glasses to Complement Any Wine

The Types of Drinking Glasses You Need in Your Kitchen

The Best Measuring Cups and Spoons for Your Cooking Tasks