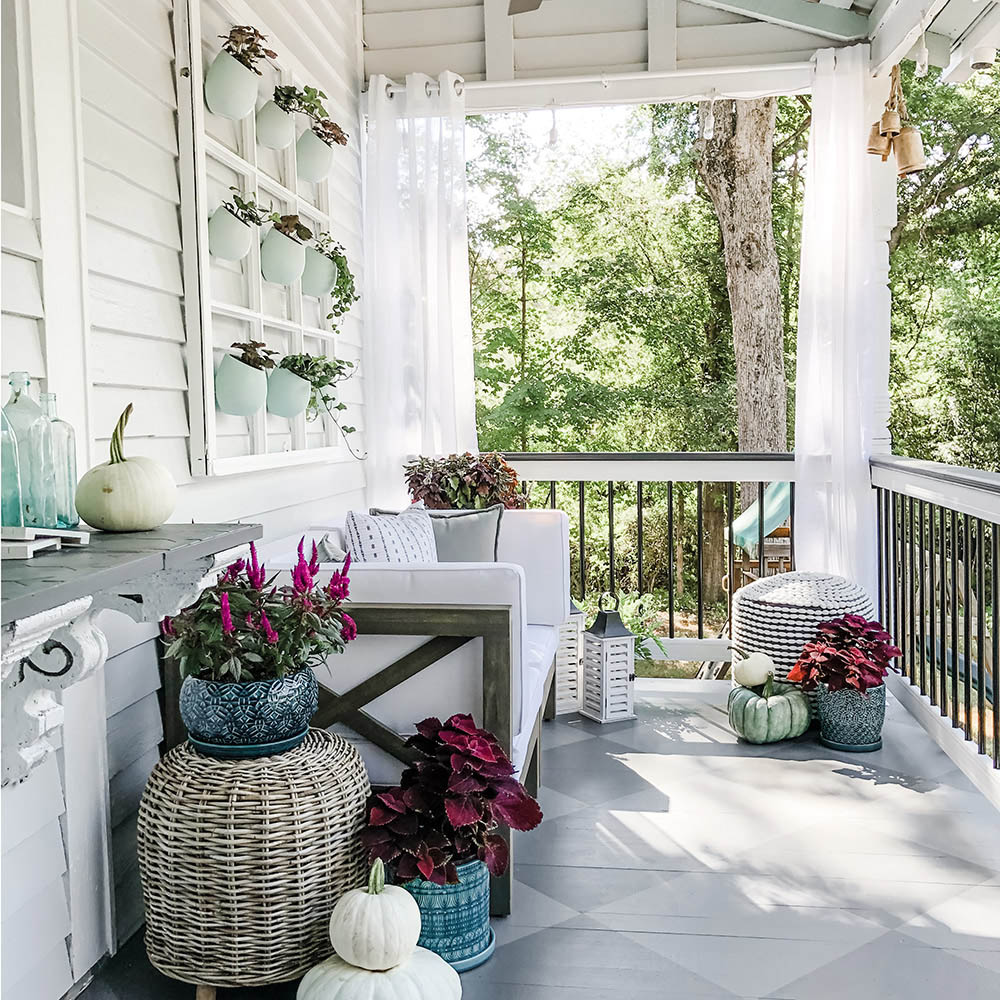 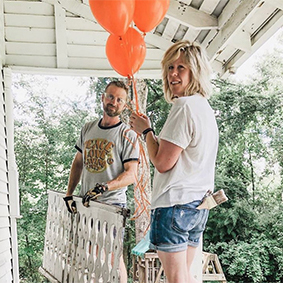 When you purchase a fixer upper to renovate, you are taking on a huge challenge. With a little help from The Home Depot, Katherine Brooks of Design Central Project revamped her neglected back porch to a beautiful space for the whole family to enjoy. 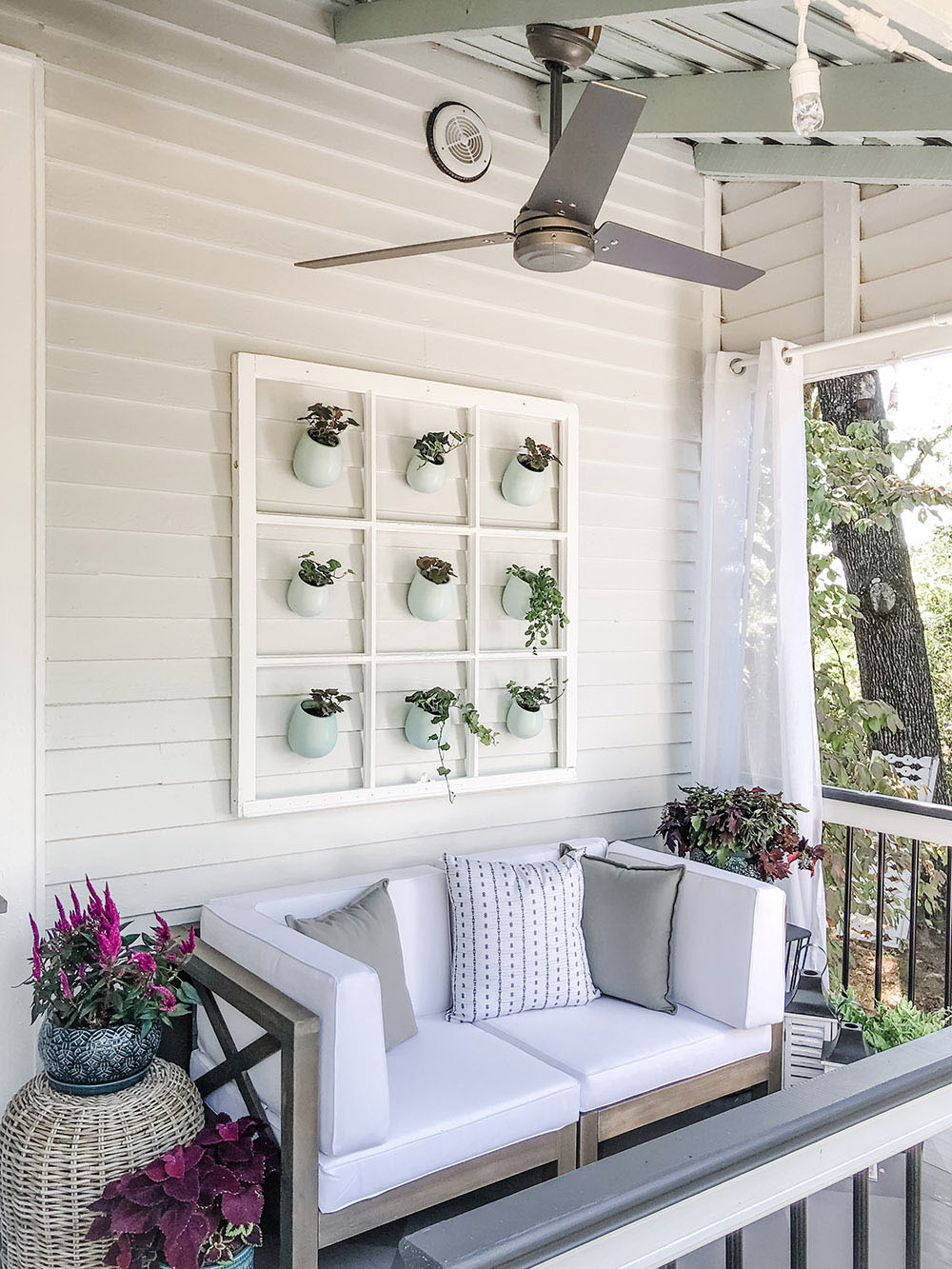 When we purchased our 1905 Victorian home a couple of years ago, we knew we’d gotten ourselves into a quite the fixer upper situation. As in, it ALL needed fixing up. We tackled the big things like floors, kitchens and bathrooms first. But recently we’ve been trying to revive, restore and refresh the smaller, charming areas of this home like the back porch. These areas drew us to this quirky old place originally. 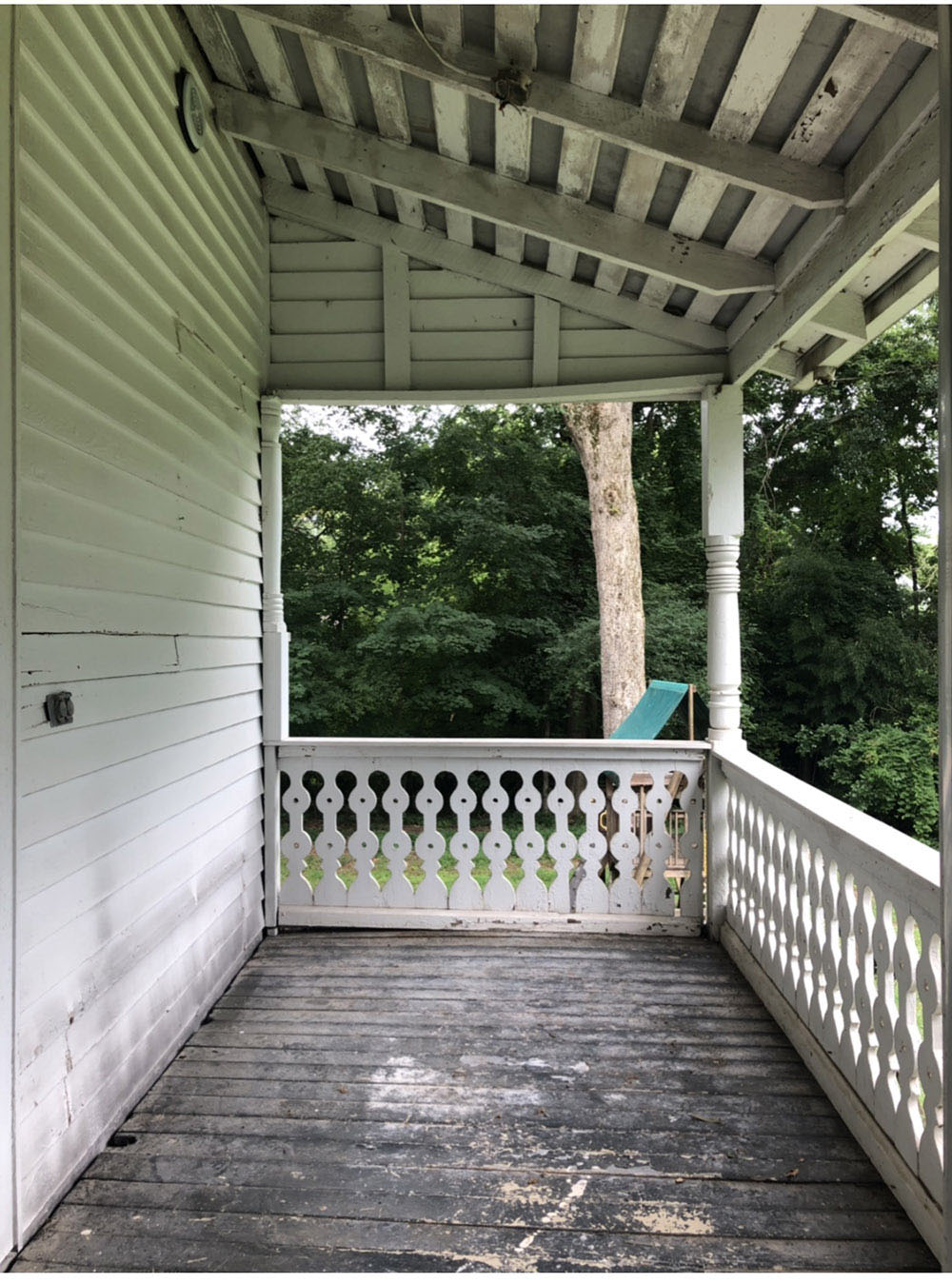 The small back porch off our kitchen was a neglected little nook that needed lots of love — both aesthetically and structurally. We were determined to make it the perfect spot for a quiet morning coffee or late evening chats.  To make that happen, we had to start from scratch. The kind of “scratch” that creates a scary, gaping hole behind a door five feet from your refrigerator. 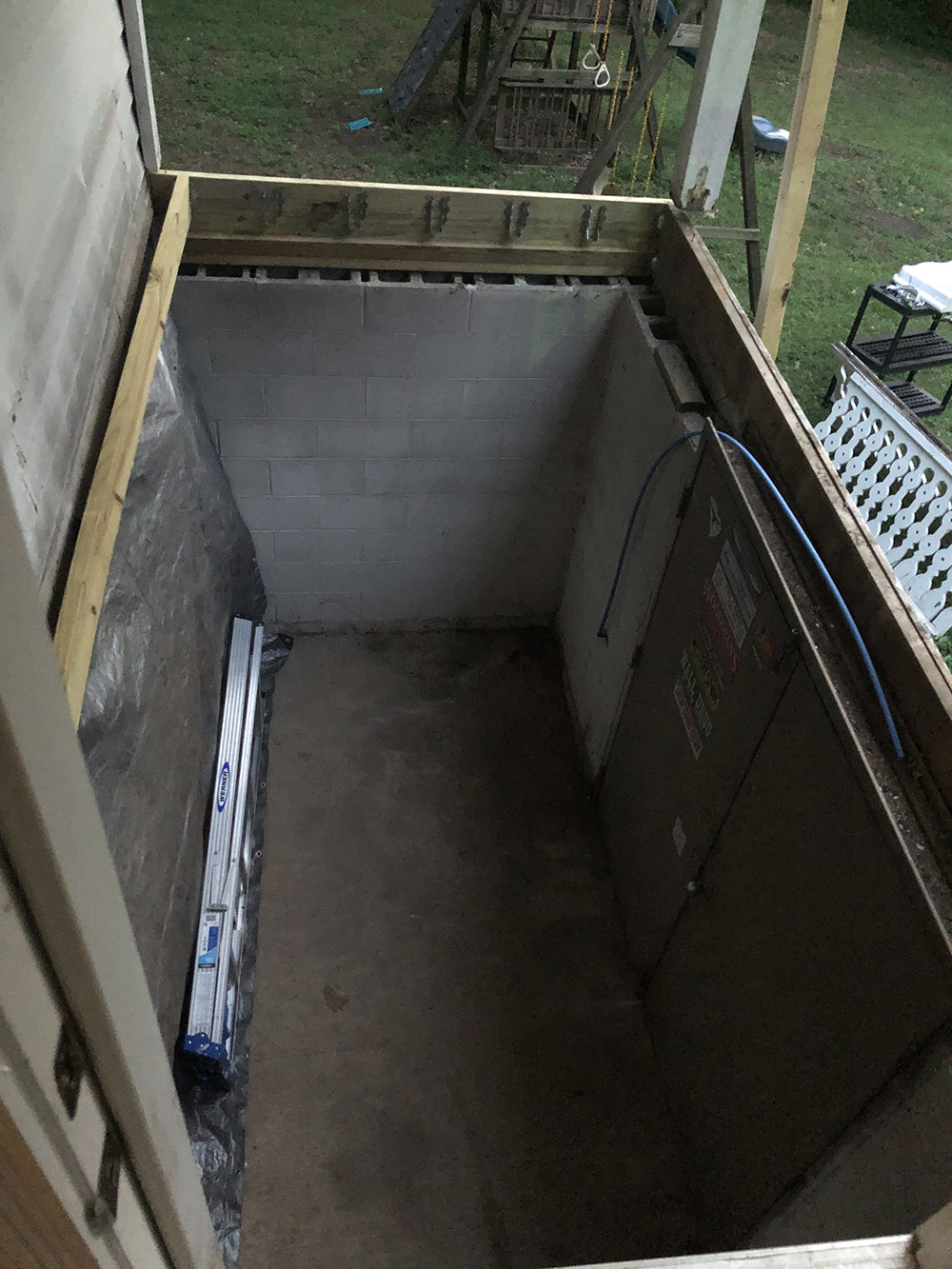 The flooring and floor joists on the former back porch were both in disastrous shape. The floorboards were cupped and warped, and the joists were cracked, burned and spaced too far apart. Walking across the old porch felt like walking on the keys of a giant rickety piano. The fact that one of us didn’t fall through the floor and down to our basement was a tiny miracle. It all had to go, and we were left with a giant hole, a giant project and a giant amount of apprehension. 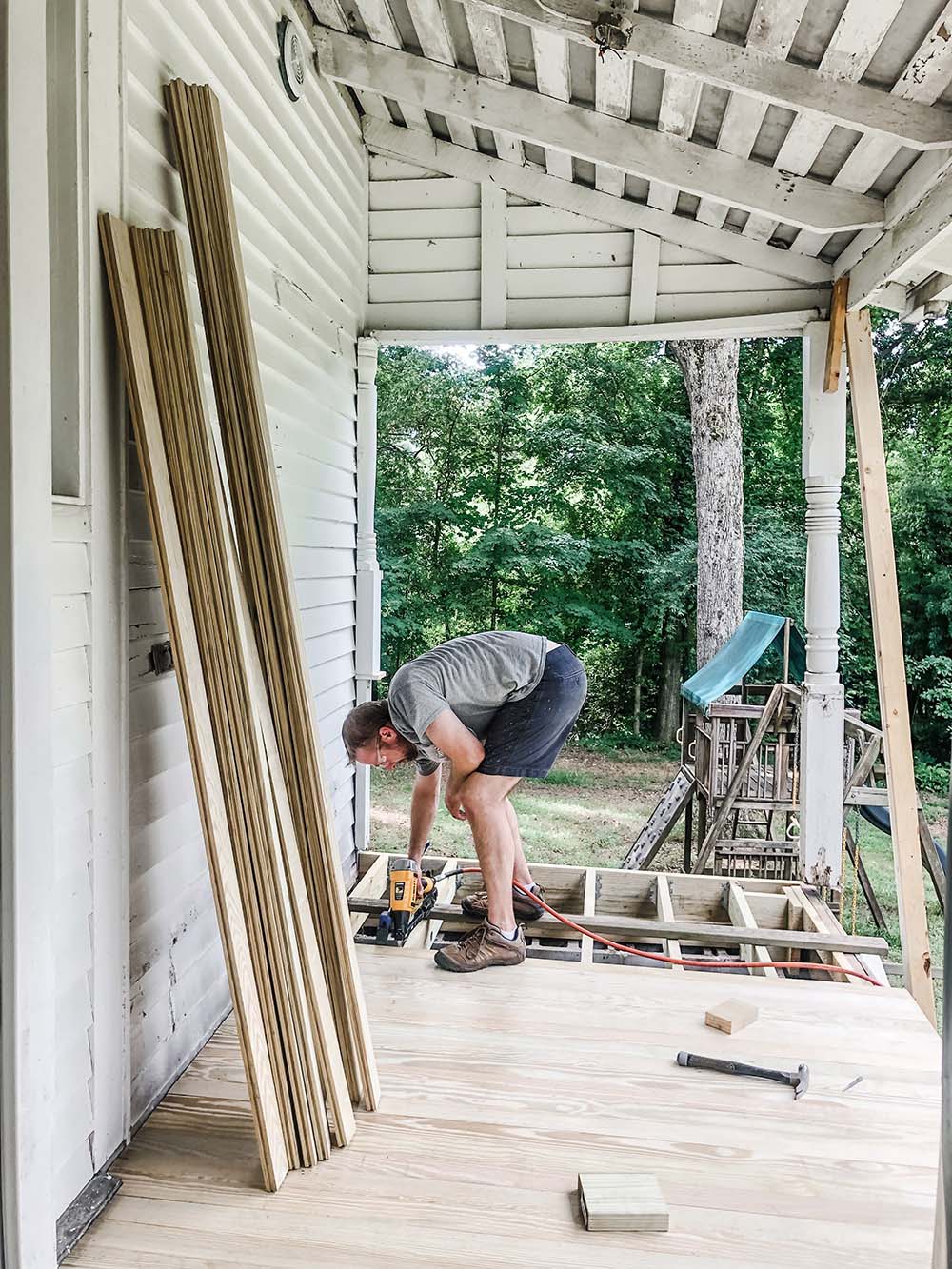 Luckily, we got lots of help from the folks at The Home Depot Pro Desk. They were able to suggest and special order the exact flooring we needed for the back porch space. The flooring was delivered in less than a week; just enough time for us to re-hang the floor joists at a safe 12 inches apart. Then we installed the 2.5 inch treated tongue and groove wood flooring on top. The installation process was easier than expected; the “tongue” of each board just needed to be nailed into each floor joist below, and then on to the next board. Finally, we were able to walk on our porch floor without risk of severe bodily injury, and we had a sturdy blank slate that was ready to get her groove back. 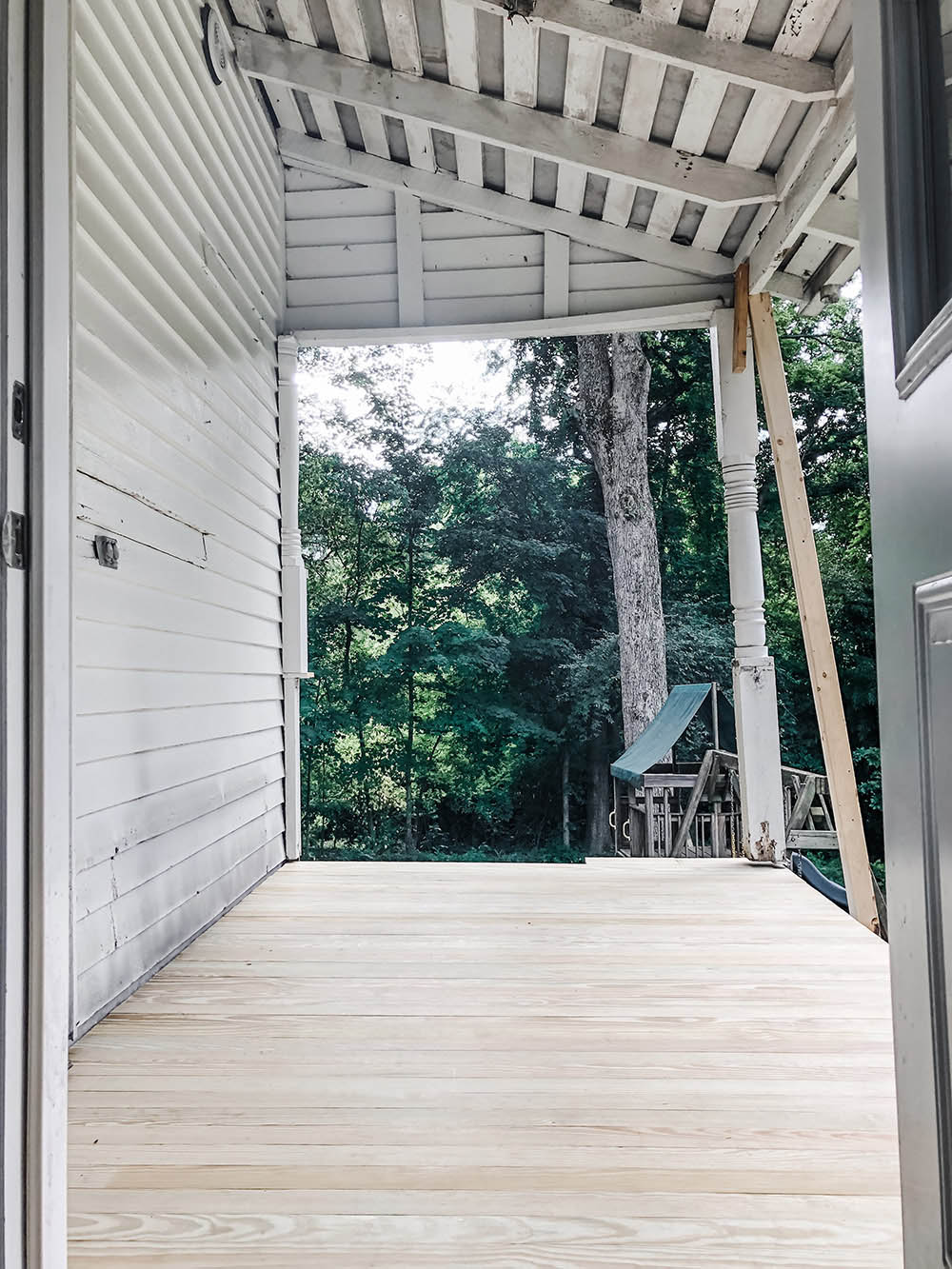 Since the original porch floors had been painted, we knew we wanted to paint the new ones, but this time we gave them a subtle, fun diamond pattern that added some visual interest without being overwhelming in the small space. After applying a coat of primer, we used Behr Exterior Porch and Patio floor paint in Iron Mountain, and painted the darker diamonds in a hasty self-concocted mixture of Iron Mountain and Asphalt Gray to create a minimal color contrast in the pattern. The result was a fun, historical nod to the former floors of the era, but with a fresh, modern feel. 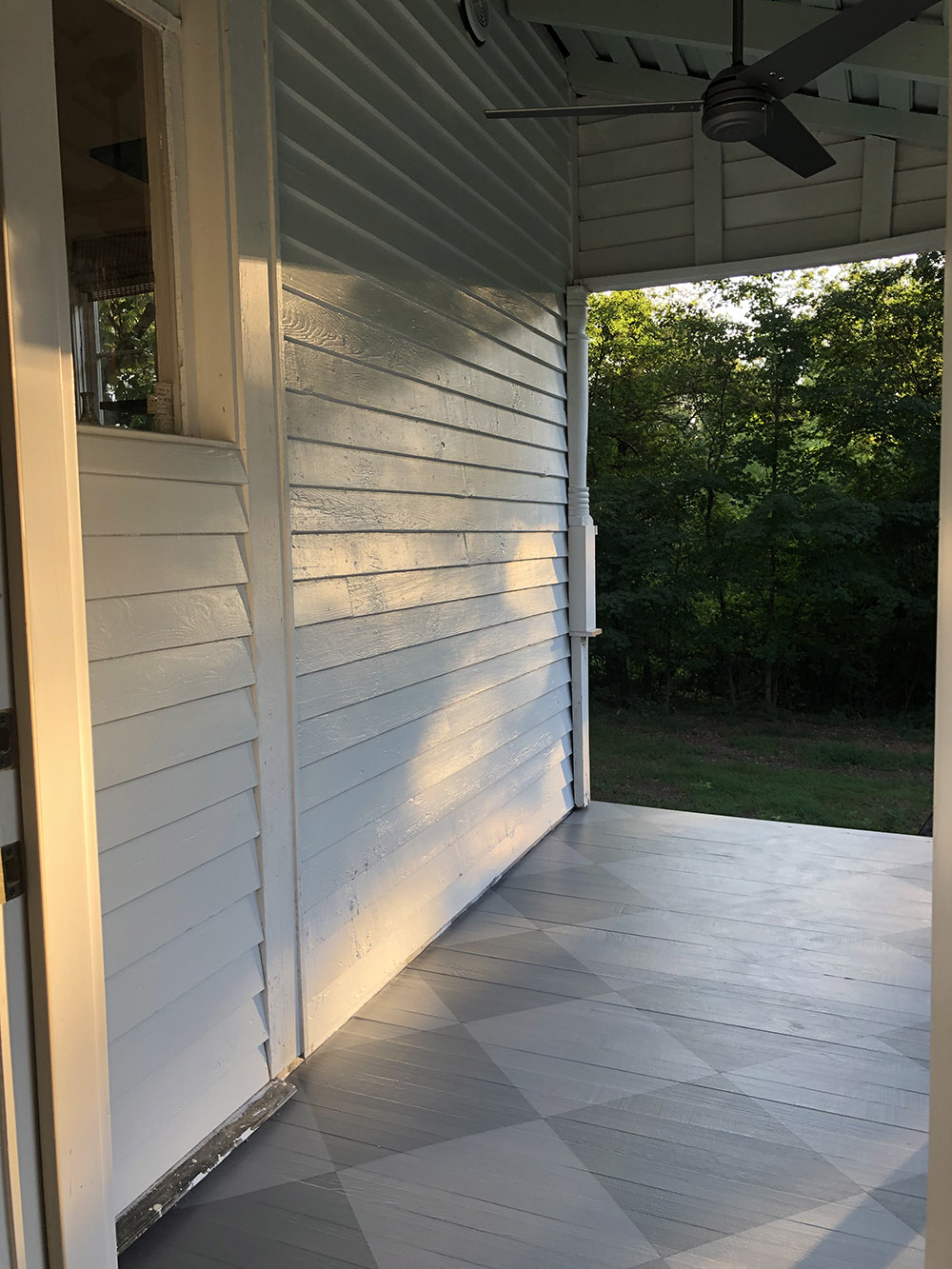 After much debate, we decided to replace the porch rails rather than reuse the old ones.  The original rails were unique, but they would have had to be seriously modified to be brought up to code, and they also gave the small porch a more enclosed feel, which we were trying to avoid. We settled on new DeckoRail Aluminum Pressure Treated Southern Yellow Pine deck rails, but were secretly worried if they would feel too modern in contrast to the rest of the house. When they were painted and installed, however, the result was a more open-feeling area that allowed the view to shine, and took away the “I’m trapped in a hamster cage” vibe of the old rails, so we were exceptionally pleased with the change. 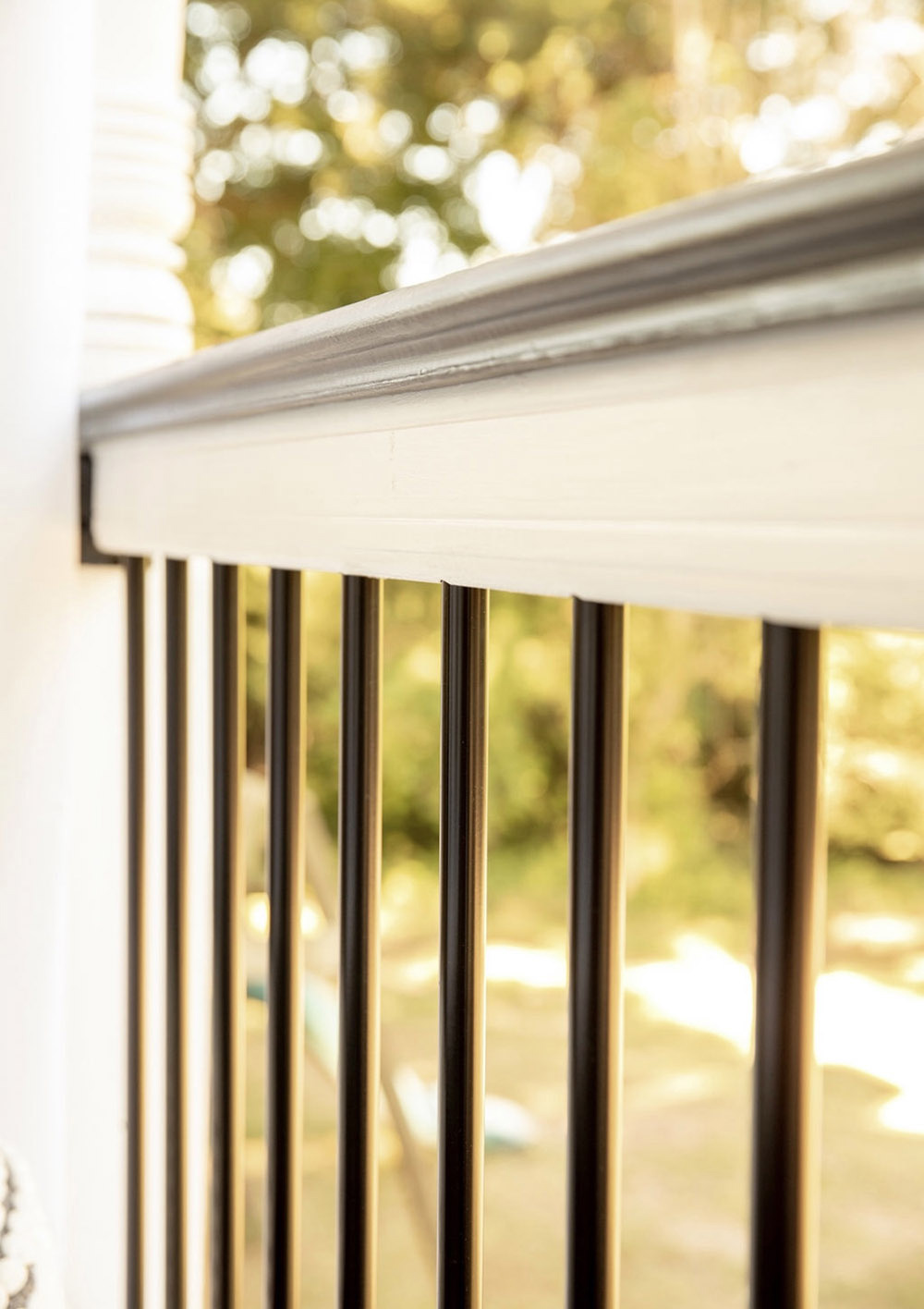 We chose subtle, clean-feeling paint colors for the rest of the space: Behr Nature’s Reflection to create a traditional “haint blue” ceiling, Behr Seagull Gray for the siding, and Behr Ultra White for the trim.  The new paint and railing made the space feel open, fresh, and inviting. Just a few more touches were needed to complete the transformation. 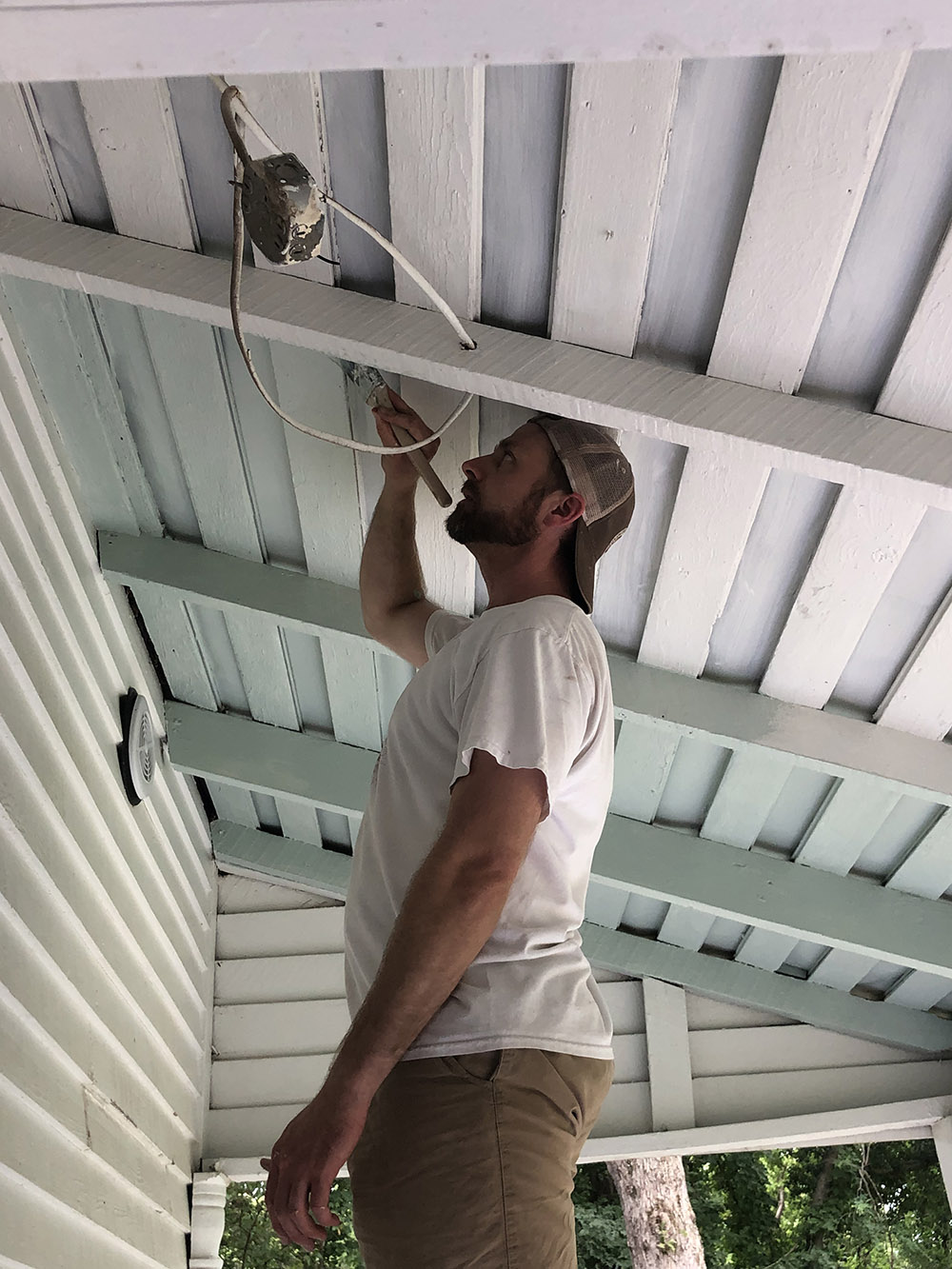 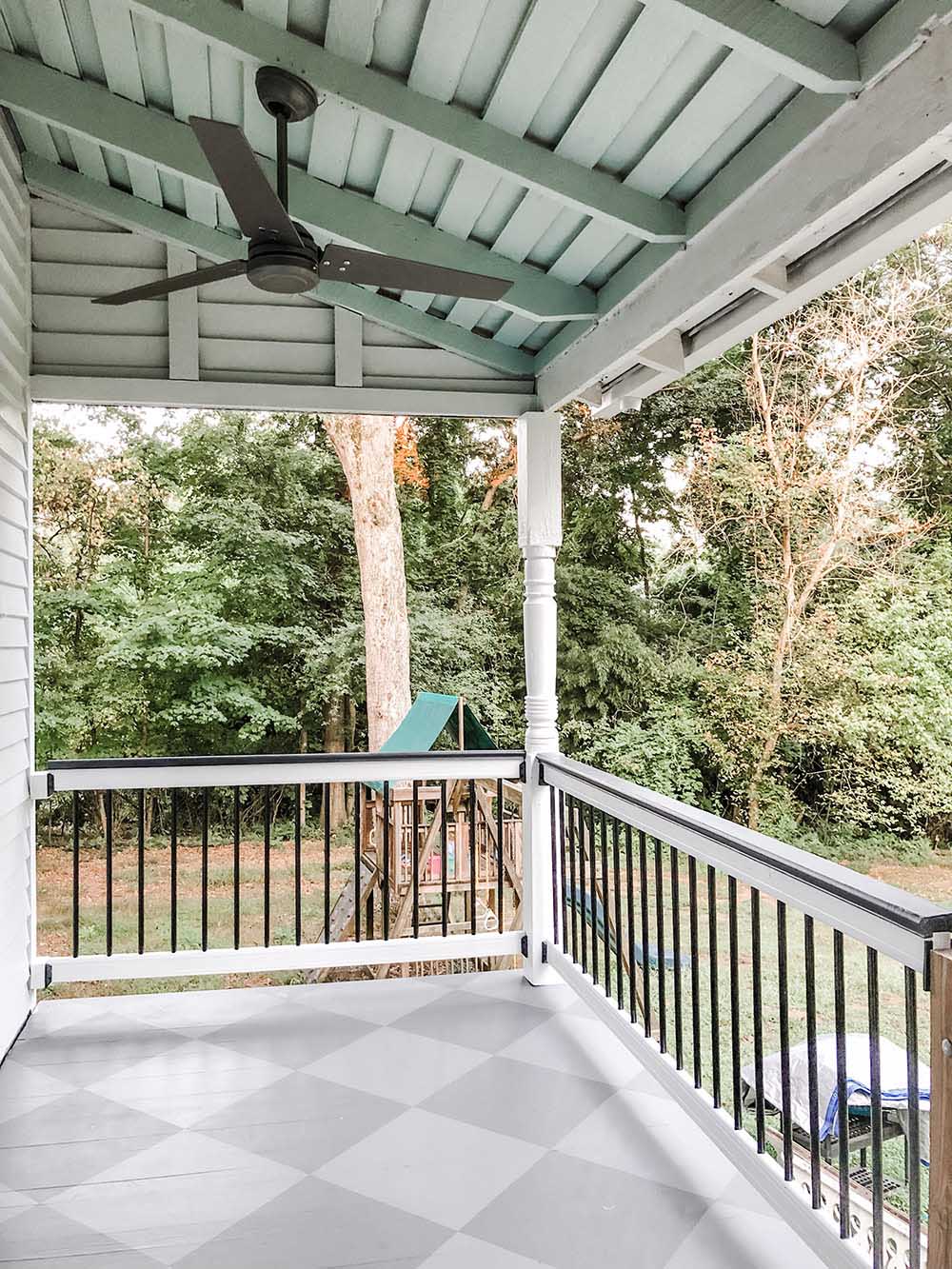 Our ultimate goal was to make this small outdoor space feel like an extension of the inside of our home, so we wanted to add practical comforts like the stylish Hunter Cassius 52 in. Indoor/Outdoor Matte Silver Ceiling Fan to make even the steamiest summer evenings more bearable. We also wanted to increase the cozy factor of the space by adding Elrene Bali Sheer Indoor/Outdoor Window Curtain panels and by hanging Enbrighten 6-Bulb 12 ft. Classic Integrated LED Cafe String Lights around the perimeter of the area. It was an added bonus that lights came in white, so they were attractive and non-obtrusive looking during the day time. 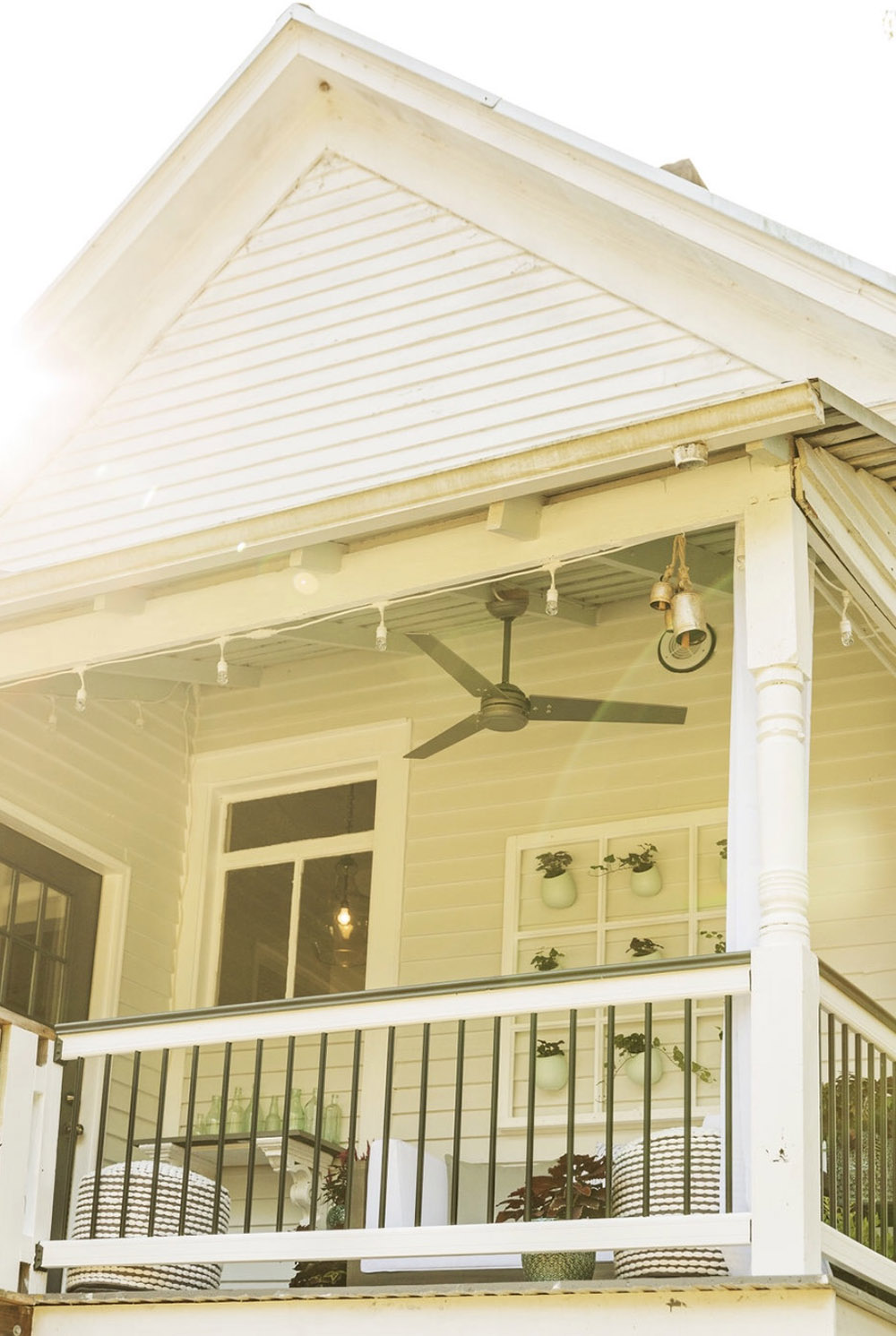 We used Arcadia Garden Products Round Mint Ceramic Wall Planters to make a fun, unique and plantable accent wall above the seating area. The planters are framed out by a 4ft x 4ft window frame that we cleaned up, painted and screwed into the siding. The mint wall planters, along with the gorgeous blue-toned larger planters, help accentuate the ceiling color. And give the entire space an open, serene and organic feel. 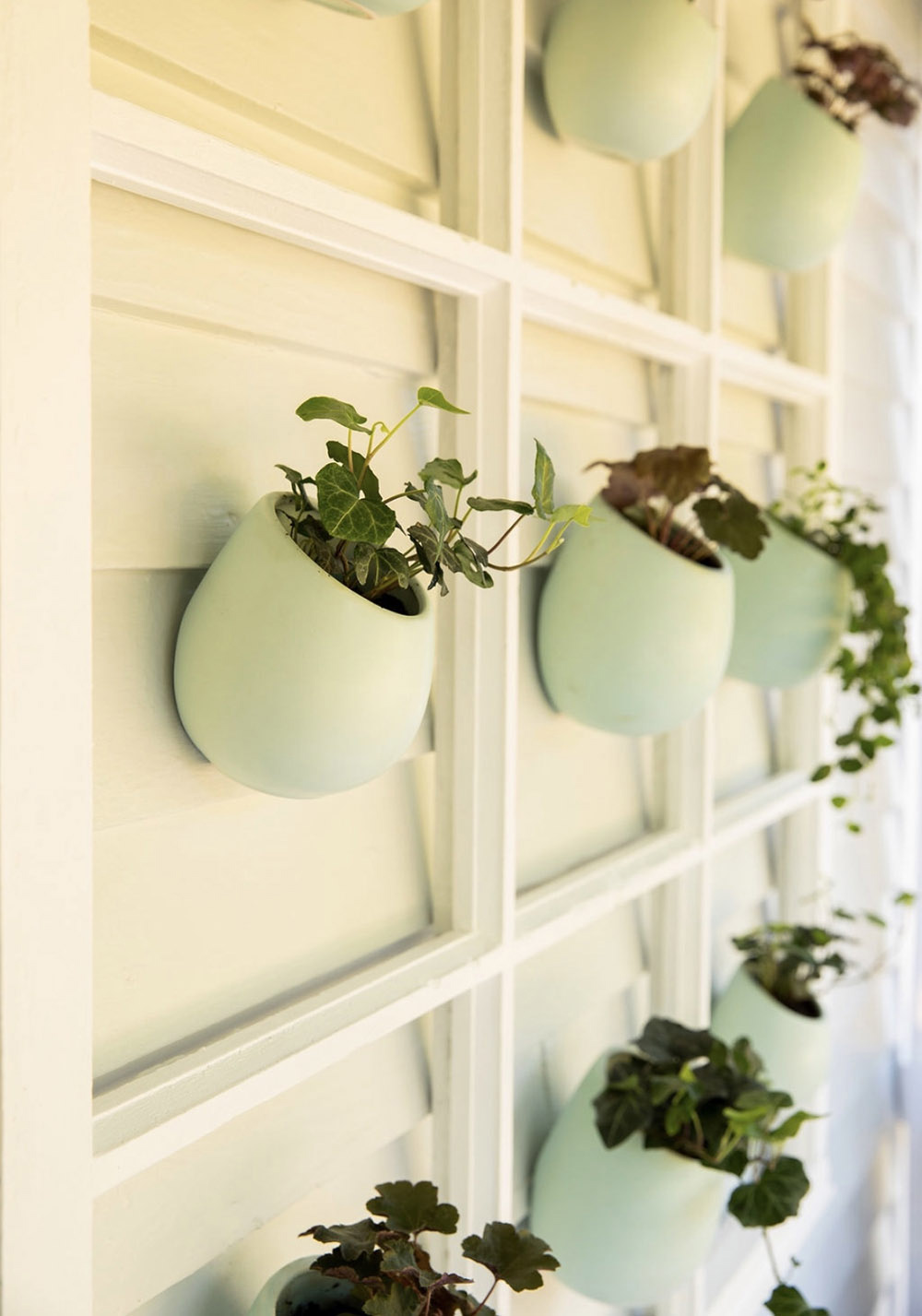 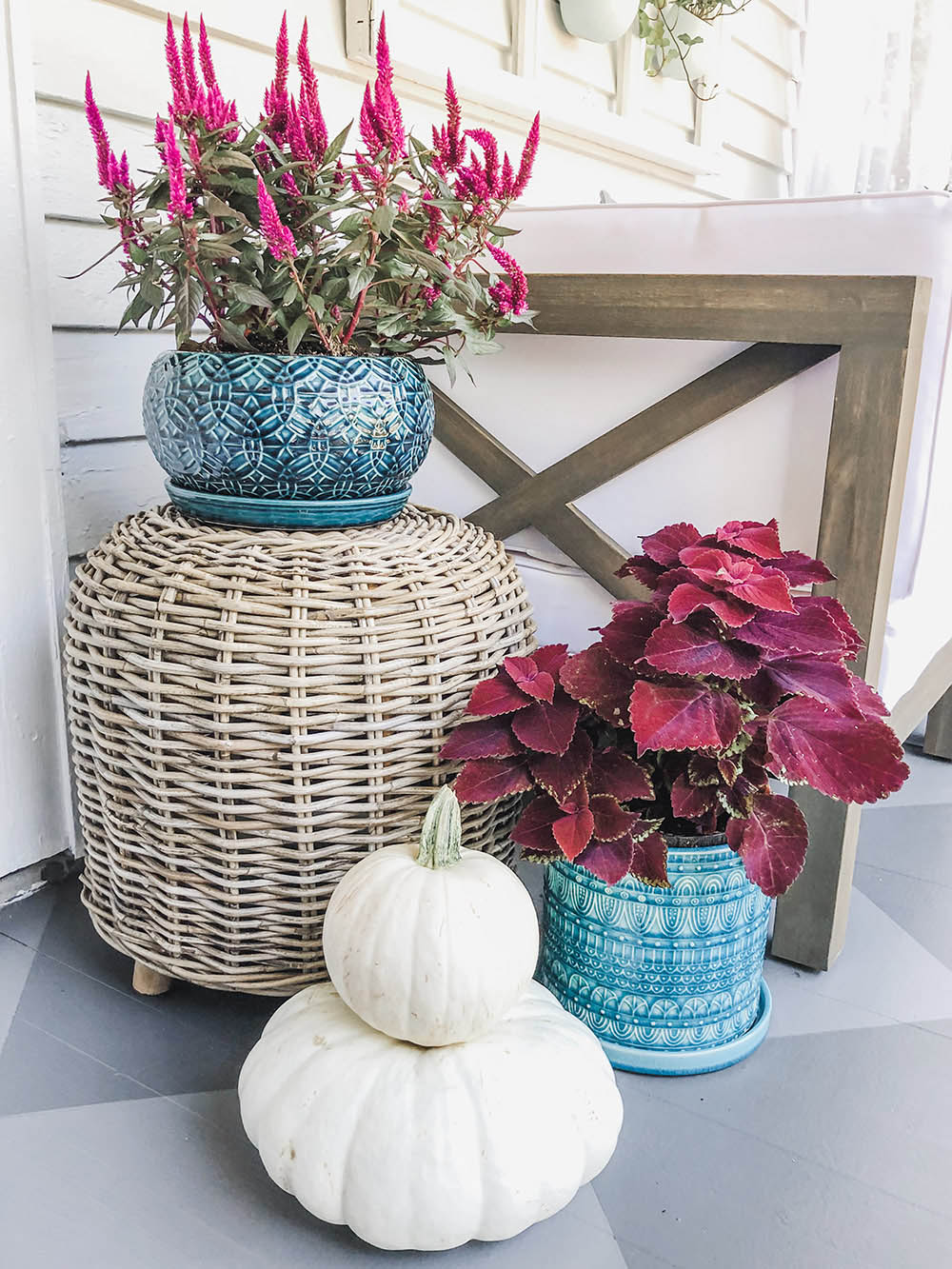 We are so excited that our little back porch nook is now the safe, cozy and inviting space we’d envisioned, instead of the crusty, dirty death trap it once was.  We spend so much time enjoying this spot, and feel that the area has truly added value to our home. We’ve slowly realized that with the right process and products, even the smallest space can have a huge impact. 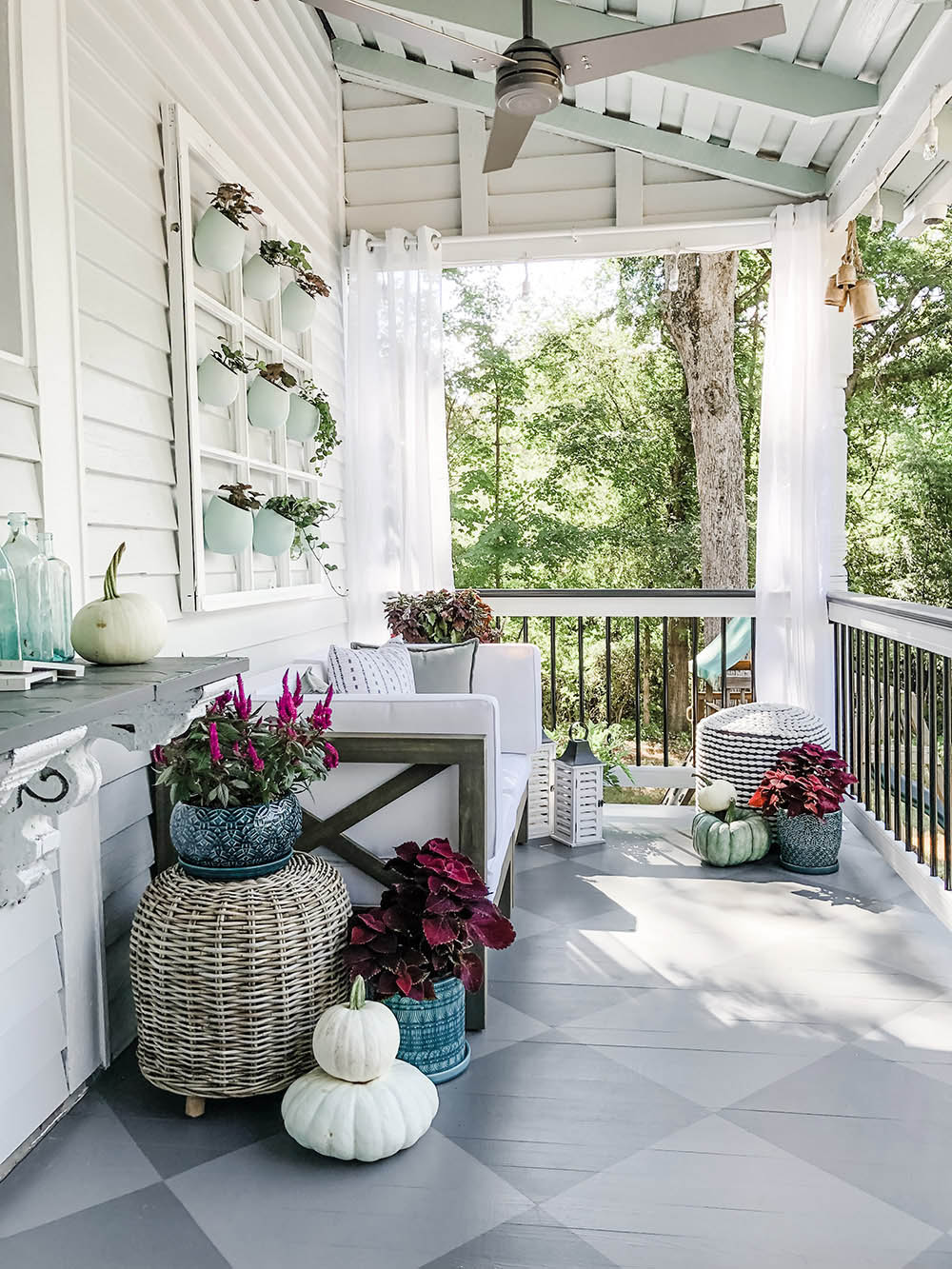 Best Paint Brushes for Any Project

Best Exterior Paint for Your Home

How to Prep a House for Painting